Facebook launches an application designed to create and view gameplay in real time.

Facebook launches an application designed to create and view gameplay in real time.

In a pandemic, the popularity of video games is growing. So, Facebook launches an application designed to create and view gameplay in real time. 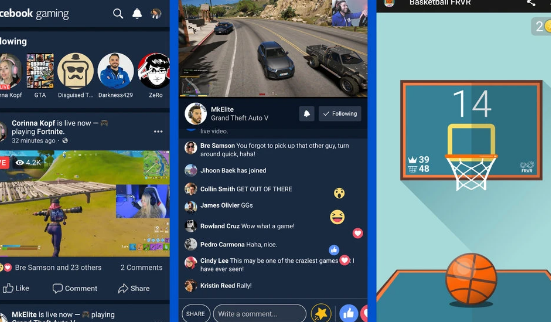 Facebook plans to introduce the Facebook Gaming mobile app on Monday, the social network said, which is the most decisive step in the video game business when people seek entertainment during a pandemic.
This free app pays off for several years of investing in Facebook. According to him, more than 700 million of its 2.5 billion monthly users are already engaged in game content. The application is mainly intended for creating and viewing live gameplay, a rapidly developing online sector in which Facebook is struggling with Amazon Twitch, Google YouTube and Microsoft Mixer services.
Because globally insisted or ordered to stay home during a coronavirus outbreak, the $ 160 billion global gaming business is booming. Facebook originally intended to release the application in June, but accelerated its plans when the scale of quarantine became clear.
“Investing in games in general has become a priority for us, because we see games as a form of entertainment that truly brings people together,” said Fiji Simo, Facebook application manager who reports to Mark Zuckerberg, CEO of Silicon Valley. “This is entertainment, which is not just a form of passive consumption, but entertainment that is interactive and brings people together.”
Ms. Simo said the pandemic pushed the company to accelerate other game projects, including a new
tournament feature. “We are seeing a significant increase in the number of games during quarantine,” she said.
Over the past 18 months, the company has tested the Facebook Gaming app in Southeast Asia and Latin America and plans to release it on the Google Play store for Android devices. According to Facebook, iOS versions will be released after their approval by Apple.
Facebook has an uneven track record highlighting individual apps under its own brand, such as Facebook Camera and Facebook Paper. However, some non-Facebook apps, including Instagram and WhatsApp, flourished.
Although Facebook was the top gaming platform in the FarmVille era ten years ago, the company has not been a dominant force in recent years. According to Streamlabs, Facebook ranks 3rd in the total number of hours after YouTube and Twitch in the streaming game market. Currently, viewers are watching the broadcast of Facebook games using the main Facebook application and a new application in emerging markets, where it is already available.
The new application includes casual games and access to gaming communities, but its fate will largely depend on how successfully it encourages people to watch and create live gaming streams. The Go Live feature allows users to download streams of other mobile games on one device by pressing just a few buttons.
Then these streams can be transferred to someone’s personal Facebook page, which can greatly facilitate the ability of people to become lovers.
In contrast, streaming mobile games on Twitch, the market leader, usually require people to install more sophisticated third-party programs or connect their mobile device to a computer.
“There are many people who listen to music and say:“ I can imagine myself as a musician, ”said Vivek Sharma, Facebook vice president of gaming. “People watch the streams, and they like:“ I want to be a streamer, ”and with Go Live it’s just a few clicks, and then you’ll streamer live.”
There are no ads in the application yet. Facebook will make money when viewers send “stars” representing amounts of money to streamers, actually receiving a commission. The company said it wants to create its own gaming audience before adding other ways to make money.
According to Mr. Sharma, Facebook is focused on mobile devices and a new application for streaming, because mobile applications are more intense than browsing from a computer. Twitch is dominated by desktop games.
“We don’t want to be the background window on the Chrome tab when someone does their homework or does something else,” said Sharma. “With a mobile application, if you have an application open and you use the application, it is in the foreground. You can’t do anything else on your mobile phone, and it’s very powerful. ”